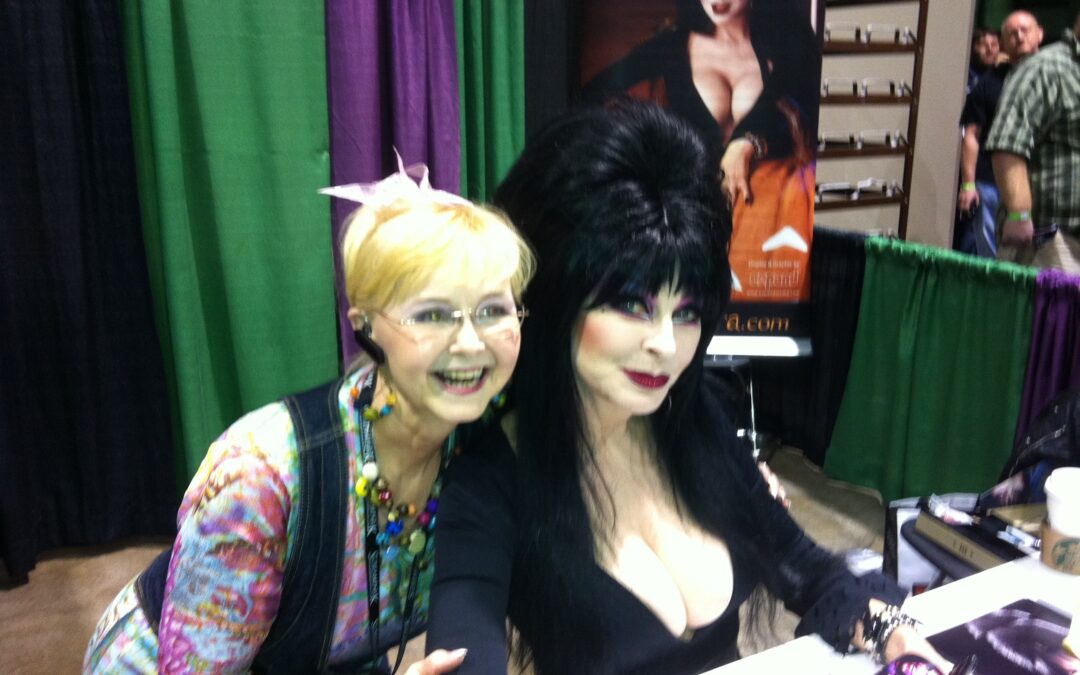 One of the biggest perks while owning The ScareFest Horror and Paranormal Convention for eight years, was meeting so many iconic celebrities of the horror movie genre and the paranormal celebrities from the ghost hunting shows on TV.    If you are curious about the ScareFest you can click here https://www.youtube.com/watch?v=OdoprkdVXGA and watch a video about ScareFest’s earlier years and what the stars and fans had to say about their experiences.

Through the horror movie years high attendance at the box offices started to reach the greatest numbers in audience in the 1960’s.  I was turning 12 years old back then and I had such a love for these super horror movies.  The list would include such greats as Psycho, Eyes Without a Face, Rosemary’s Baby, and Night of the Living Dead.

I would see most of these movies at the drive-in theaters.  Drive-in theaters were developed on a large strip of land surrounded by a high fence, to prevent anyone from sneaking into the drive-in theater without paying, not to mention hiding in the trunk of the car and waiting till dark to sneak out to watch the movie.  When you arrived at the drive-in you would drive pass a huge marquis all lit up with the name of the movie, top star names, and what time the drive-in opened.  Once you drove through the entry you would pass the concession stand before coming upon rows of slightly elevated hills.  You would pull your car onto a favorite spot while maneuvering to get close to the speaker box that was attached to a pole.  Once you were into the space you would roll down your window, yes, I did say roll down, and pull the speaker into the car and attached it to the driver’s window after rolling it back up halfway. Looking out the windshield you could see the large outdoor movie screen.  Once it was dark enough the movie would start, and you could view the movie from the privacy and comfort from your car.

The next best thing about the drive in was the concession stand where we could buy bags of popcorn.  If you were really hungry you could buy hot dogs, hamburgers, fries, moon pies, Coca-Cola and popsicles.  Most of the time Mama would fix popcorn before we left the house and put it in a huge brown paper bag.  Then she would pack small lunch paper bags so we could have our own individual popcorn. This would cut down on all the sibling fighting over who got the most popcorn.

In 1987 marked another great time for the horror movie industry.  We were watching Evil Dead 2, Hellraiser and Predator that featured people losing appendages in the woods. The Lost Boys and Near Dark were revealing modern day vampire tales.  Speaking of vampire tales, in 1988 one of my favorites was a movie starring Cassandra Peterson in, “Elvira, Mistress of the Dark”.  Later, in the 1990’s when they released her movie to VHS, I made sure I got a copy and as technology has advanced, I also purchased a DVD of “Elvira, Mistress of the Dark”, a total must have.

In 2010 I was beyond thrilled when we were able to book Cassandra Peterson, as Elvira, for the ScareFest Horror and Paranormal Convention.  As she had one of the biggest lines of fans waiting to get her signature and a photo of her, I was lucky enough to sneak into her booth and get some time to visit her.  I was so star struck and totally giddy that I was meeting her for the first time.  I was amazed at how radiant she was in her appearance and totally so much fun to be with.  I introduced myself and proceeded to tell her how much I loved her work and the iconic character who she had created as Elvira.  There is so much more to this brilliant woman.  I learned that after she visited Las Vegas as a teenager, she was inspired as she watched the performance of Ann-Margert while in a film Viva Las Vegas.  After returning home and graduating from high school she returned to Las Vegas and landed a contract at only 17 to be a showgirl in Frederic Apcar’s, Vive Les Girls.  While living there she met and dated Elvis Presley.  She had a small role as a showgirl in the James Bond film Diamonds Are Forever (1971) and played a topless dancer in the film The Working Girls (1974). In the early 1970s, Peterson moved to Italy and became lead singer of the Italian rock band, The Snails.

After our time together, I had to return to my many duties as the convention was going on for 3 days.  A few hours later I had one of my security people come up and took me by the arm and said, “You need to come with me now.”  I was thinking that something terrible had happened the way he pulled me down the hall into a private room.  When I turned and looked around there stood Cassandra all dolled out as Elvira.  She had agreed for my staff to bring me there in the quiet and vacant room so she and I could stand in front of a backdrop and have a proper portrait done of us together.  I was so thrilled and honor at this sweet jester.  I have the portrait framed and for years it hung in my office.  At the moment it is packed away with my other belonging while I wait for my house to be finished.  When that day comes it will continue to hand in my office for all times.

I am starting a new podcast in about 3 to 4 weeks and one of my biggest goals is to have Cassandra Peterson as a guest.  I want to find out more about her earlier years and to get an idea on what she has planned for herself and Elvira in the near future.

I found several great YouTube videos about Cassandra that I thought you would enjoy.  I listed two URLs below that are most resent.  The first one is highly informative about this awesome, talented woman and the second one is a funny song she sings about COVID 19.  I hope you enjoy these videos.

https://www.youtube.com/watch?v=_5wicJrLbLQ  Information about her life

While on FaceBook I saw where Cassandra has a book release coming soon 9-21-21, “Yours Cruelly, Elvira” and you can preorder at https://www.hachettebooks.com/titles/cassandra-peterson/yours-cruelly-elvira/9780306874352/

Please check out what the current owners are doing with The ScareFest Horror and Paranormal Convention 2021.  It is going to be EPIC!!  www.thescarefest.com

The Day I met Sinbad (not the sailor…the comic)

The Day I met Sinbad (Not the sailor… the comic)

Since owning the ScareFest, Horror and Paranormal Con for 8 years I have had the pleasure of meeting so many fantastic talented celebrities. Most of them represented the theme of horror or paranormal subjects in their movies or TV shows. There is nothing more exciting to me than a good horror story to make your imagination go deep into the scariest parts of your mind.

After about 5 years of doing the horror part of entertainment, in 2013 I was so ready to attend the Comedy on Broadway show featuring the one and only, Sinbad!!   I feel as if he is the funniest and most talented man in his field.  His jokes were familiar about life and with his great delivery he made you laugh to appreciate such happenings.  As the night continues his humor only got better and better.  When he ended his session, I just wanted him to stay and continue his stories.  I did not want this night of joy and laughter to end.

Once his gig was over, he made his way out of the room by passing by the standing audience who were shouting words of praise and clapping as he passed.  I was standing on the end of one of the rows and as he approaches me, he stopped and shook my hand. Then he continued to walk out of the room.  OMG!!  This was so unexpected, and it totally made for one of my most unforgettable experiences.

After the show on my way out, to my awesome surprise I learned that Sinbad was doing photo ops.  I immediately moved from the exiting line and hopped into the photo line.  I was totally gaga and overwhelmed by his status!!  I was having a difficult time being patient for my time with him during the photo op.  When I finally got to stand up beside him, I looked at him and said,” You are the best”.  I know that was probably the lamest thing I could have said but I was so star struck I’m surprised that I did say that.

I love how my photo with Sinbad turned out.  When I have a trying day, I will pull this photo out and instantly I will start to feel a bit better.  My appreciation for the experience to meet Sinbad was a joyous occasion that I will never forget.

David Adkins (born November 10, 1956),[1] better known by his stage name Sinbad, is an American stand-up comedian and actor. He became known in the 1990s from being featured on his own HBO specials, appearing on several television series such as Coach Walter Oakes in A Different World (1987–1991) and as David Bryan on The Sinbad Show (1993–1994), and starring in the films Necessary Roughness, Houseguest, First Kid, Jingle All the Way, Good Burger, and Planes (2013).

To my dismay, I learned that Sinbad had a stroke in November 2020.  I am posting this in hopes that he will get more prayers and positive energy sent his way. Here’s What We Know About Sinbad’s Recent Stroke