A Sweet Spirit speaks to her guests at Talbott Tavern 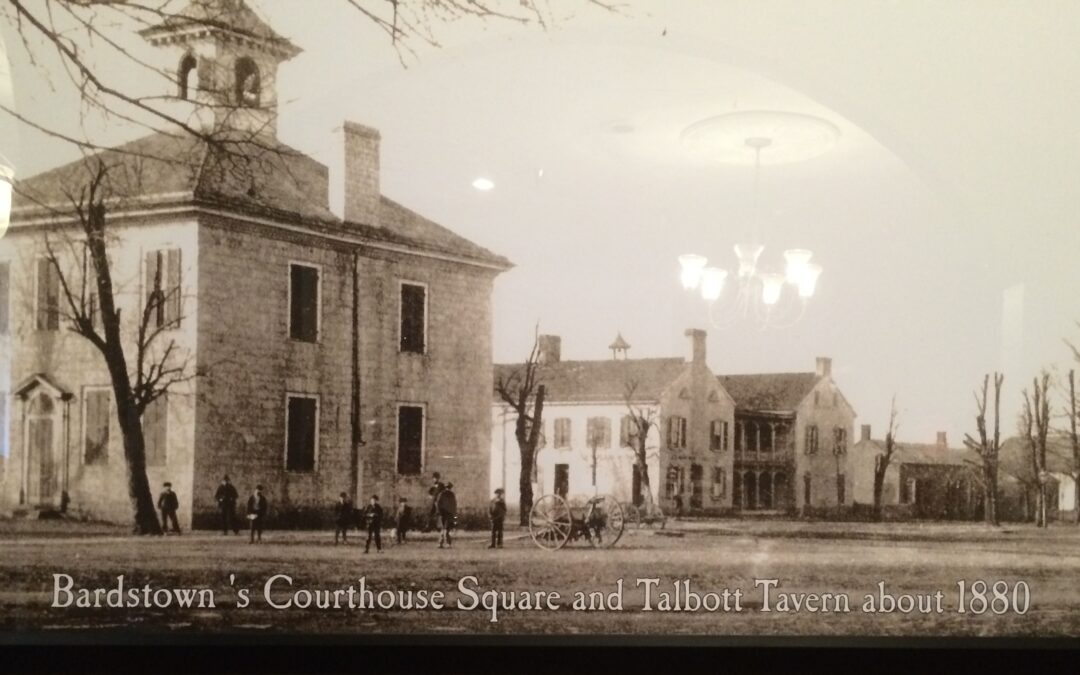 When I moved to Bardstown in 1994, I was so thrilled to be living in a place that seemed to have stopped in times of long ago.  As I parked my car for the first time to visit some of the historical downtown buildings, I hesitated to cross the street to watch a stagecoach ride passed me on one of the main streets.  I later learned that Jonsie was the owner of Around the Town Carriage & Gifts, 223 N. Third St. Bardstown, KY 40004. (502) 348-0331. https://www.kentuckytourism.com/bardstown/attractions/family-fun/around-town-carriage  I was so entertained by the unique atmosphere the horse and buggy rides created on the streets of Bardstown.

As I headed towards the Tourist center I watched as a gentleman and three ladies came walking through the doors after me.  Oh my, they were wearing clothing that reflected the 1800 period of history.  After meeting the manager of the visitor’s center, I was told that they were part of the Stephen Foster Story performed every Saturday night at the amphitheater from June until August.  https://www.stephenfoster.com/

As I continued to travel down the main streets, I came upon what look like a vintage train parked at what seemed to be a museum.  Once I entered the main building, I learned that it was called the Dinner train.  It was a RJ Corman 1940 train that took you on a two-hour trip into the beautiful countryside of Bardstown and surrounding areas.  During the two-hour trip you were served a delicious meal while listening to music that was popular during the 1940’s.  https://www.kydinnertrain.com/

Then to top off my first day exploring this amazing little town I found the American Civil War Museum with one of the biggest selections of Civil War items and memorabilia that I could ever hope to see.  There was also a Women’s Museum that chronicles the achievements of women of all backgrounds, races and creeds during the 1800’s and Civil War. The Museum’s buildings are adjacent to the Old Bardstown Village, a collection of ten original 18th and 19th Century log structures that form a Colonial period settlement along Bardstown’s Museum Row. I loved walking down the path that led to a blacksmith shop, a tavern, an inn, a church, and a beautiful water mill with swans swimming in the sun.  https://bardstownmuseumrow.org/

As I continued my search through this awesome town the visitor center pointed out the rich history of the bourbon country.  They told me that Kentucky is where 95 percent of the world’s bourbon is made.   A few years later after living in Bardstown Heaven Hill Bourbon Heritage Center was built. They now provide a tour of tasting and learning the history of Bourbon.  They also offer an excellent gift shop for an unforgettable experience. https://heavenhilldistillery.com/bourbon-heritage-center.php

William Heavenhill was the original owner of the distillery.  He was born on September 15, 1783 and died June 6, 1870 at the age of 86.  Around 2004 I was granted permission to visit the gravesite of William Heavenhill.   I had been asked by management of the Bourbon Heritage Center to do a ghost hunter presentation for the center’s visitors.  I told them it would be great if I could do some investigation of the grounds in case, I could capture something paranormal while using my equipment.  As I visited Heavenhill’s grave and looked at the date of his birth I noticed that the day I was doing this investigation was September 15, the day of William’s birth.  As I walked around the representative told me an interesting story about the birth of William.  She said that just as his mother went into labor there was an Indian attack on the property.  The family was fighting off the attack as William was being born.  When I returned home and was reviewing all my photos, videos, and audios I was thrilled to discover I had captured a very eerie screams of a woman.  In the recording you can hear me walking around the grave and asking questions of the sweet spirits.  I can assure you that during this time none of us heard the screams of a woman.  I was thinking that it might have been the screams of his mother as she gave birth to William during the Indian attack.

Look at me, I digress. Anyway, getting back to the Talbott Tavern, after visiting the historic downtown of Bardstown I knew that I wanted to get a job at the Tavern.  My first visit convinced me that the Tavern was haunted.  I was so excited to have felt so many spirits there as I walked around the halls before I had my first meal.  During my meal I asked the server if the Tavern was haunted.  I got a definite yes as a response to my question.  At that point I told myself that I wanted to work here, and I was going to apply for a position.  I’m happy to say that I was hired as a secretary and within a couple of months I was promoted to General Manager of the Talbott Tavern.  I was there from 1995 until 1999.

It was an amazing 4 years and then there was the fire.  In March of 1998, the tavern caught on fire and was devastated. The inside was destroyed, and the roof was burned away …  I got a call at 5am on a Saturday that the tavern was on fire and the fire department needed to know how many people were staying the night to make sure they had rescued everyone.  I gave them the number of guests and then dove in my car to get to the tavern.  I was so shocked to see the building on fire and the roof caving in.  I just sat down on the sidewalk and cried.

A few days after the fire I was able to go back into the building to see how badly it was burned.  There were barriers around the first and second floors to keep anyone from falling through the floor and other hazards.  After checking and feeling confident that it was safe in the other areas, I decided to do a ghost investigation. I wanted to make sure that they were all still there despite the fire.

I invited a few friends of mine to come with me to see if I could capture any evidence that the spirits that I had encountered before the fire was still there.  I had 3 analog mini recorders that I distributed to three different rooms and let them record on both sides of the tapes while we were there.  We spent most of the night monitoring our crude ghost hunting equipment.  We had a compass sitting on our camping table we took with us.  We took turns checking the compass to see if it was reacting in a way that would indicate that the magnetic field was being interrupted.  We had an outside thermometer that we checked and then record the time and temperature to see if there was a spike in the temperature.  We also sat up analog video recorder and several analog audio recorders.  Back in my earlier ghost hunting days it was very boring to sit and watch the compass and the outdoor thermometer.  Occasionally we would walk around and talk to the sweet spirits to see if they would come through as an apparition or a shadow person that we could capture in our photos and videos. After about 3 hours into the investigation, we gathered and packed up our ghost hunting equipment and said goodbye to the spirits.

The next day I took all three of the recorders from the investigation and as I ironed my clothes with my headphones on, I began to listen for the EVPs.  Most of what I heard was a slight static with no sounds of life or motion.  Then I was thrilled to hear a voice with a full sentence.  It said, “Welcome to the Talbott, I will seat you”. It was such a clear voice, at first, I thought it might have been Melody, one of the ghost hunters in my group.  She is one to have fun with all of us and I thought maybe she had gone into the room to play a funny on me.  When I called her and asked her if she had done that, she totally denied it.  Another reason that I believed her is before the EVP came through there were no footstep sounds to indicate someone walking up to the recorder and speaking.

The next thing I wanted to do was figure out who was speaking.  I did have a clue to who it might have been through some of my historical research.  In 1886 George Talbott with his wife Annie Spalding Talbott purchased the Newman House.  They lived there and over the next few years they had 12 children.  Annie had 3 sets of twins and that is how their family grew so fast in numbers.  The family continued to live and work at the Newman House and during that time they lost 7 children to disease and flus.  Then in 1912 George Talbott died.  Annie decided at that time that she and her older children would stay on to run the Inn and restaurant.  In George’s honor she changed the name from the Newman house to the Talbott Hotel.

Annie was in charge for another 4 years and then in 1916 she sold the Hotel and restaurant to T.D. Beam, Jim Beam’s brother.  When T.D. Beam took over he changed the name from the Tavern Hotel to the Talbott Tavern.  In today’s world most of the locals refer to the inn and restaurant as the Tavern.  For years, the tavern has been the hot spot for most locals to go for a good meal, relax in the pub, or enjoy music on Saturday nights at the bar.  By piecing together this timeline I felt that since it was not a tavern until T.D. Bean took over that there was no way Annie would refer to it as the Tavern.

Another interesting tidbit I learned during my research was the reason why alcohol was never served at the Talbott Hotel.  When George was young lad one of his favorite uncles got into a fight during an evening of drinking in a bar.  During the fight he was shot and killed.  George blamed it on the alcohol and decided then to never drink alcohol or allow it to be served in his restaurant.  So again, it made sense to me why Annie would not have welcomed her guest to the tavern.  She would likely say, “Welcome to the Talbott, I will seat you.”

Please check out the Youtube video about this story. https://www.youtube.com/watch?v=fZM-AI18qJM&t=111s

Welcome to the Talbott, I will seat you.